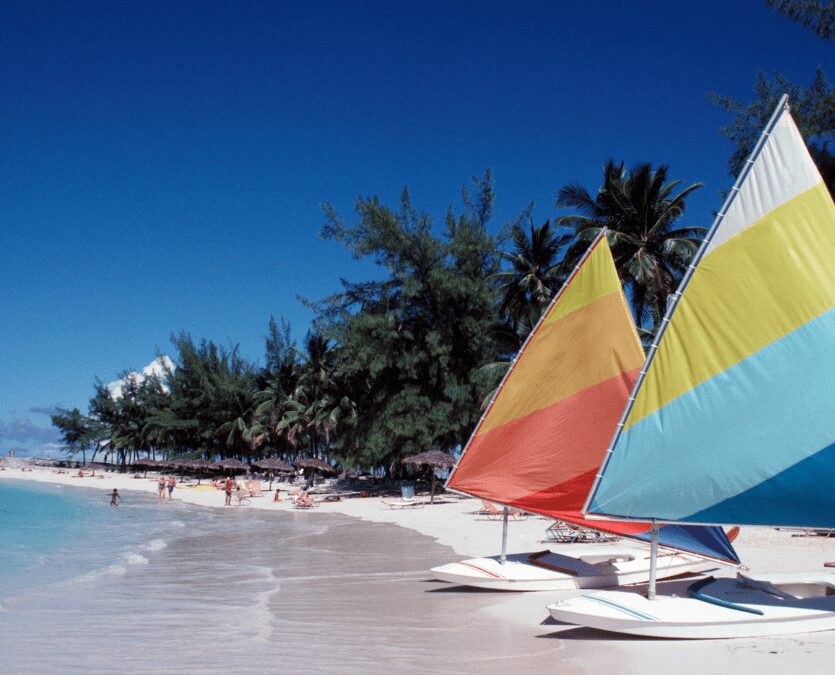 As the sales and marketing partner of Caribtours in Ireland, ASM-Ireland was recently asked to represent Caribtours on a Fam trip to Barbados.  And so, I set off with a small group to explore an island I’ve had the great pleasure of visiting previously.  I also decided to document a little about the trip, to give you a sense of the hotels we visited and the activities that are available to those choosing to holiday on this glorious island.

Arriving in Barbados, the group was transferred to the Colony Club by Elegant Hotels, located on the west coast of the island.  The hotel with its colonial style is known for its relaxed atmosphere and timeless sophistication but it did feel a little tired in places. However, the group learned the hotel is about to go through a refurbishment with a completion date of August 2023.  Apparently the newly refurbed hotel will be inspired by the 1930s which sounded just perfect given the location.

On our first day, after an early morning swim followed by a fabulously presented buffet breakfast, the group set off on a Jeep Safari Tour of the island and wow, the views along the north and east coast were simply breath-taking.

The break for lunch was in the Open Kitchen, a little off the beaten track in the parish of St Michael, but well worth a visit.  It’s a bistro style restaurant with great food, wine, and service. Aside from the restaurant, there is also an upmarket interior design store and wine bistro so give yourself a little extra time to have a wander around and browse.

Later that day, the group headed over to the 02 Beach Club & Spa which has been completely renovated and the ‘second’ tower now complete. Whatever you do, don’t miss out on a visit to The Aqua Spa on the 7th floor of the new tower.   It’s amazing!

We did have an opportunity to see the rooms in the new tower and as you might expect, they’re light and modern.  The rooms in the older tower while they have already been refurbished, we heard there are further plans in place to give them a lighter feel with brighter colours in the rooms.

On our second day, after checking out of the Colony Club, we headed off to Harrisons Cave Adventure Centre. It’s a bit of fun, there’s a zip line and other activities but the cave tour far surpassed the centre activities for enjoyment.  We did eat at one of the centre cafes, however food is okay, just nothing to write home about.

After a busy day, we checked into our next hotel, the Crystal Cove, another hotel within the Marriott/Elegant Hotel group.  First impressions were different to the Colony Club. The Crystal Cove felt smaller, and the client base less discerning than that at the Colony Club.  It was also a lot busier which might be in part down to the fact it is an all-inclusive hotel and targeting a different demographic.

The room I stayed in was a really nice beachfront duplex however nowhere near as secluded or quiet as the room in the Colony Club.

Note: We were informed that Crystal Cove and all other Elegant Hotels are going through a complete refurb due to be completed in Aug 2023.

The activity organised for the evening was a sunset cruise onboard the ‘Seaduced II’ catamaran which was superbly laid out onboard plus the food and service was excellent.  It was the highlight of the trip so far with the group all leaving very impressed. 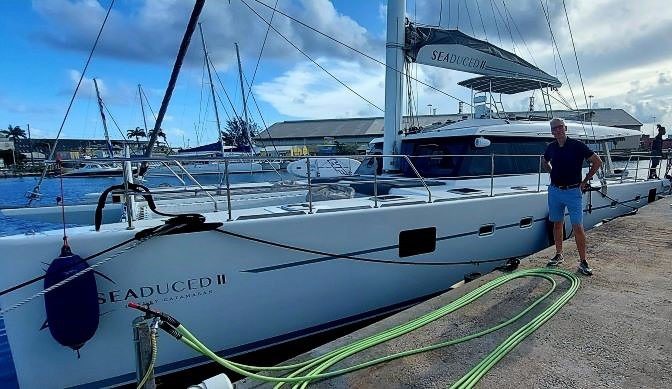 Breakfast this morning was at The House by Elegant Hotels, a really gorgeous hotel with superb staff, even at breakfast time!

We were met by the Manager who shared with us the hotel was also doing some refurbishments (but on a smaller scale to the others).  Bedrooms were stylish with terracotta flooring, brightly coloured cushions and a terrace or balcony.   Overall, this chic high service adult-only hotel was a winner with the group.

Worth a mention is the once famous Daphne’s restaurant, loved by celebrities and VIPs, and owned by the Elegant Hotel Group has closed and reopened under new owners and called Positano.

For our morning activity, it was off to experience the St Nicolas Abbey Train and Distillery Tour.  It was good to see the process of distilling, bottling and naturally tasting.

That was followed by lunch at the Sea Shed, owned by the same people who run the “Seaduced ll” catamaran, so we had high expectations.  And we were not disappointed.  Great atmosphere and super food – a definite recommend.

Later in the evening we were transferred to the Fairmont Royal Pavilion Hotel for a site inspection and dinner. This was a hotel that I had visited on a previous trip and one I’d loved.  Its location is simply beautiful, there’s lots of space, plus a stunning restaurant. JC Martinez, the GM of the hotel joined us for dinner and deserving a mention is Tim, the Head Chef, who delivered the most amazing meal which had each of the group saying it was as close to perfect as you could get. A wonderful evening, and I will remember that meal for a long time to come 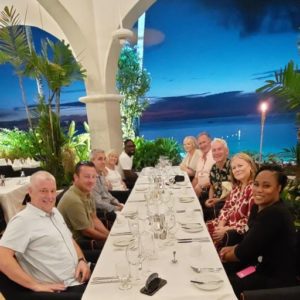 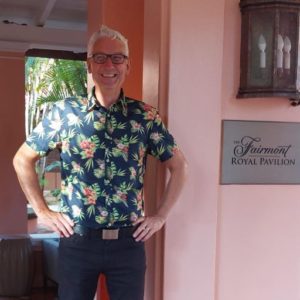 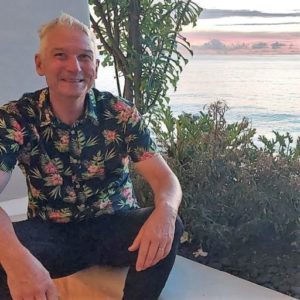 After breakfast, we headed for the upmarket aparthotel St. Peter’s Bay Resort.  I have stayed in St Peters Bay before and feel it offers a superior product for those looking to self-cater. It’s ideal for families or those taking a multigenerational holiday. Probably more suitable to those who have been to Barbados before and are familiar with the island.  Also, car hire here a necessity.  Overall, a top-class product with lovely beach access and extremely well-appointed rooms.

And that was it, our short trip to Barbados was over, and it was off to the airport, leaving behind aqua seas, white sands, glorious sunshine and the wonderful bajan hospitality we encountered everywhere.

You can find out more about which cookies we are using or switch them off in settings.

This website uses cookies so that we can provide you with the best user experience possible. Cookie information is stored in your browser and performs functions such as recognising you when you return to our website and helping our team to understand which sections of the website you find most interesting and useful.

Strictly Necessary Cookie should be enabled at all times so that we can save your preferences for cookie settings.

If you disable this cookie, we will not be able to save your preferences. This means that every time you visit this website you will need to enable or disable cookies again.